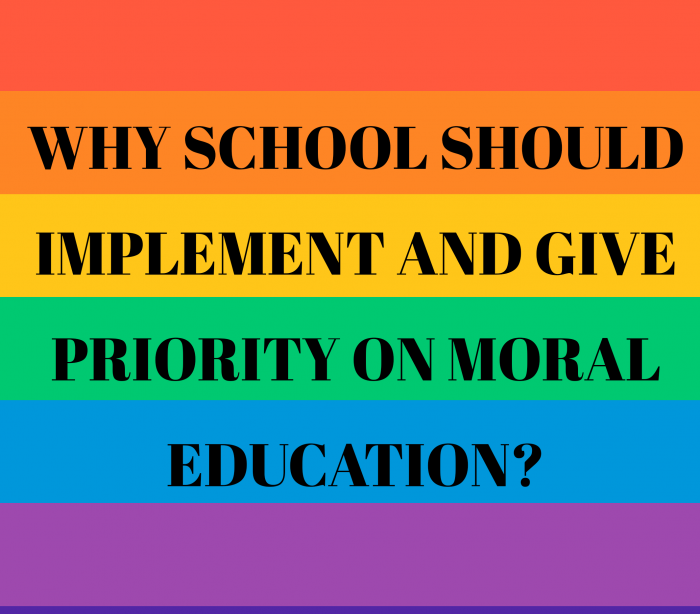 Moral Education and its importance

Swami Vivekananda said of Education: “Education is the manifestation of perfection already in man…”

To become divine (or great), man must give up suspicion, jealousy, conceit and learn to work unitedly for the common good. Courage, faith (in oneself and in God), patience and steady work, according to Swami Vivekananda are the way to success. He said that purity, patience and perseverance overcome all obstacles.

Education , the key that makes a person stand out , all chinned up in this era of competition is a vital resource for becoming aware of one’s role in the society and empowers them to think progressively. It is a matter of great debate that whether the framework of today’s education is adequate or not for all round development of the learner. While there are many disciples a learner has to go through and there are a plenty of ideas to conceive , a very important component of education at any level is Moral education.

In today’s cutting edge competitive world , where everyone just want to adopt a certain profession and flourish in it as quickly as possible , they are quite considerably missing out a very important lesson of life , that is being a good human being. Here comes the role of moral education. Today’s institutes are so into the glamour of success that they have been in a race to make themselves  a manufacturing unit of good professionals but they are unable to produce the sense of morality in the learners. That is why , to make  learners, a good human being by inducing morality in their character and personality , moral education plays a vital role. While the academic roots are no doubt are a priority , moral roots of learners should be the non negotiable priority also.

Moral education is a vast and crucial disciple as it tend to induce and produce a lot of qualities such as honesty , virtuousness, compassion and most above all , ethics. Ethics , that would help the learner to live a meaningful professional and personal life as a person’s ethics are what he is made of,no compromises at all. These qualities would help the learner to face the world , particularly the dark side of it. When a person finds himself lost in the vicious maze of life , it is the moral values that rescues him out of that horrid phase. Only a handful of educational theorists hold the view that if only the adult world would get out of the way, children would ripen into fully realized people. Most thinkers, educational practitioners, and parents acknowledge that children are born helpless and need the care and guidance of adults into their teens and often beyond.

Hence it is the need of the hour to include the moral education as a major disciple in the curriculums so that the backbone of  our nation comes out to be all - round developed as our country’s future depends upon them.