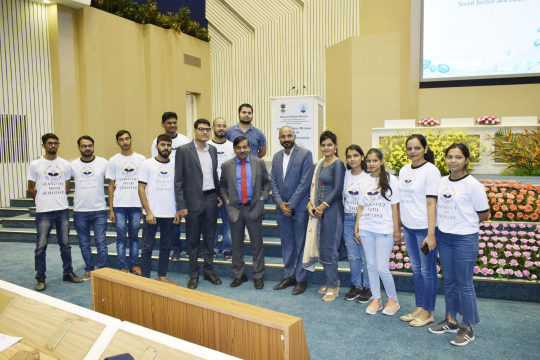 We cannot explain its taste, but we need it every now and then. We cannot describe its colour, although we see it very often. We use so much of it, yet there’s so little of it. Can you guess what it is?

It’s “water”. As many of you already knows that Prime Minister Narendra Modi, in his Mann ki Baat in may, 2019 talked about establishing a new water ministry in which the erstwhile ministries of Water Resources and Drinking Water and Sanitation will be merged, with Gajendra Singh Shekhawat at its helm. Thereafter, the Ministry has been tirelessly working for spreading the awareness of water conservation and recognizing those who have already been working with the conservation of water. The fact of the matter is that India is the largest recipient of rainwater among the world top economies. Yet, it often faces water-related issues. It is because India only makes use of 8% of the rainwater it receives down the year which itself depict the sorry state of water conservation practices in the nation. However, there are many, who have relentlessly worked towards conservation of water and on 25th September 2019 National Water Mission gave away awards to all those who have been diligently working for the conservation of water.

SchoTest team got a chance to witness the National Water Mission Award Ceremony, and the experience it gained through it, will be utilized to implement water-conserving techniques in its various initiatives. We also engaged in a brief conversation with Shri U.P. Singh (Secretary, Department of Water Resources, RD & GR, Ministry of Jal Shakti), whereby we discussed our multiple programs as to how we can contribute to water conservation.

We reached the Vigyan Bhawan at around 2 PM, where NWM Award Ceremony was to be held. Thereby we held talks with some media persons sharing our ideas of water conservation. At around 3 PM the award ceremony started with the arrival of the Chief Guest Shri Gajendra Singh Shekhawat, Honourable Minister of Jal Shakti. After that, prayer and an Oath as to we will try every bit to conserve water were held. Speeches were delivered by the Honourables. At around 4 PM award distribution started. Various states and institutions bagged those awards for their excellent work for the conservation of water. Then a final speech by our Minister of Jal Shakti was enough to lift up the already high morale of our team to its endeavour of water conservation. After that, we left for our homes but the experience we gained from this will remain with us and will be implemented in our policies.